Interview with Oliver Rohbeck, Berlin  (in German only)

31/05/2017: This day marked the date when the fourth report on the impact-oriented impact assessment (WFA Bericht) was submitted to the National Council . The report is a summary of the results of the internal evaluations carried out by the ministries and other supreme organs. It is compiled by the Federal Performance Management Office, which is part of the Federal Chancellery. The report includes evaluations of 54 projects, which were carried out by the respective budgetary bodies.* The following 5 projects were deemed to have had a significant impact on the dimension of “Equality of women and men”:

They afflicted the sudimensions “direct services to natural or legal persons or companies”, “physical and mental well-being” and “other important effects” 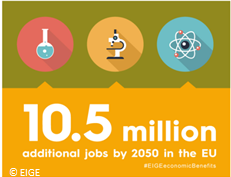 In Austria, differences in primary incomes prevail. While full gender equality would require changes in the distribution of primary incomes, it might be worthwhile taking a look at gender-related effects of taxes and tax reforms. A study scrutinising the Austrian tax system highlights that not only female wage earners as well as self-employed ones receive only about two third of the average wages of male counterparts, but also that their income-related taxes do not ease this problem as redistributive effects vary widely: By way of example, social security contributions are mainly regressive so that they may actually increase income discrepancies. As income taxes are progressive, the overall effect would be slightly positive if it was not for tax reliefs that come with the 13th and the 14th monthly salaries or the tax-fee profit margin for self-employed people, which, once again, diminish any positive redistributive effects.

If the EU stepped up its efforts to improve gender equality, more jobs would be created, GDP per capita would increase and society would be able to adjust better to the challenges related to the ageing population. These are the main results of a new study by the European Institute for Gender Equality (EIGE), launched on the occasion of international women’s day on 8 March 2017.

“Equality between women and men is one of the EU’s fundamental values. It is about fairness. Now numbers talk: equality is a driver for economic growth. Gender equality will bring more growth to Europe”, said Vera Jourová, Commissioner for Justice, Consumers and Gender Equality.

“Our study proves that gender equality is good for the economy and it cannot be disregarded if the EU wants to achieve sustainable and inclusive growth. For far too long, gender inequalities have been limiting women’s economic opportunities and we now have proof that gender equality is crucial for the entire economy”, said Virginija Langbakk, EIGE’s director.

The evidence confirms that improvements to gender equality would generate up to 10.5 million additional jobs by 2050 and the EU employment rate would reach almost 80%. EU Gross Domestic Product (GDP) per capita would also be positively affected and could increase up to nearly 10% by 2050.

Initiatives, ministries and divisions for women’s affairs: They are all very important according to the article, yet, they might not be enough when it comes to achieving effective equality between women and men. Eventually, “what counts is what’s counted”: Only quantification and calculation will translate our efforts into numbers. Half of the job of creating a society in which women and men are truly equal is done by investing into things that make sense for both, women and men.

Continue Reading Gender Budgeting: The Most – or Only – Effective Tool to Achieve Gender Equality

Public procurement accounts for approximately one fifth of our GDP. By procuring works, goods or services, the state acts as a role model and shapes society and the economy. As it enters into public agreements, the state makes use of public budgets. Therefore, the constitutional duty of gender budgeting applies.

The date of 8 February 2017 marked the kick-off for the consultation phase of a legislative draft on the Austrian Public Procurement Law 2017 (Bundesvergabegesetz) and an amendment of the Austrian Public Procurement Law for Procurement in the field of Defence and Security (Bundesvergabegesetz Verteidigung und Sicherheit). The legislative revision is based on EU directives 2014/23/EU, 2014/24/EU und 2014/25/EU which entered into force on 28 March 2014 and ought to have been transposed into national law by 18 April 2016 (save for some exceptions). So far, only a small amendment has been made to the Public Procurement Law in force (referred to as “small amendment 2015”). The legislative draft now aims to implement European law by adding and revising provisions on:

Public procurement law is an instrument to guarantee effective and transparent competition in public procurement and, as such, it is part of Gender Budgeting. As public procurement has a high significance in terms of GDP (nearly 20% of Austrian and European GDP), a state’s decisions on how to procure have a lasting effect on the economy and on society at large.

The aim of promoting women and gender equality is in line with competition law and art 19 para 6 of the Austrian Public Procurement Law (Bundesvergabgesetz). Following other ministries‘ commitment in this regard, the Ministry of Health and Women’s Affairs has published a circular on integrating measures to promote women and gender equality in public procurement below EUR 100,000 in December 2016. In accordance with this circular, companies are obliged to present or implement measures to promote women and gender equality if they are awarded a contract below EUR 100,000 whose term exceeds or is equal to 6 months. They can choose from a catalogue of four categories (“employment and career advancement”, “qualification”, “reconciliation of work and family life” and “structural measures”), which is an integral part of the circular. The number of measures to be chosen differs according to company size and there are exemptions for very small ones. Also, prove must be given halfway through the term. Click here to access an unofficial English translation of the Declaration of Commitment, inclusive of the Catalogue of Measures that goes with it.

At least since 2014, it has been clear to us that the Austrian Gender Budgeting model has become an international example of best practice. Back then, a Mutual Learning Seminars on Gender Impact Assessments organised by the “High Level Group Gender Mainstreaming” (HLG GM) featured the Austrian way of doing things.

From our point of view mutual learning is not exclusively about learning from others (other stakeholders and best practices), but it is also about learning with others and further developing your very own methods and approaches. In this case: our very own flagship model of Gender Budgeting. By launching the Gender Budgeting Blog, we have successfully applied our lessons learned at that seminar. Not only this, but also our way of seeing mutual learning has been acknowledged as yet another best practice example.

The Austrian Parliamentary Budget Committee (see website of the Parliament) compiles analyses and reports for the parliamentary budget committee. In preparation of the parliamentary budget negotiations on the Annual Federal Finance Act for 2017, the Parliamentary Budget Office scrutinised the draft budgetary plans for 2017. One chapter is dedicated to gender equality and gender budgeting. The full version is available here. You might also take a look at the German blog section, where a summary of the report has been provided. Even though it will not provide an official translation, Google Translate may be used in this case.